Lorna Brown’s journey to Tableau started in primary school when she fell in love with Maths. At around the same time, the Warrington native became aware of the local religion, Rugby League. Like many folk from her town, she fell in love with the sport and when we talk over Google Meet she announces proudly that she is a season ticket holder for the Warrington Wolves and attends all home and away matches.

“I was a massive fan of Countdown when I was younger,” says the 28-year-old. “I’d come home from school and couldn’t wait to do the numbers part of the show. I just loved numbers, working with numbers and the challenge of figuring things out.”

From early on, Lorna focussed on those twin obsessions of numbers and sport which eventually brought her into the world of Sports Biomechanics and Sports Analytics.

“This was where I first fell in love with Tableau. I loved seeing how they reacted to seeing their data being visualised and how they used it to improve performance.”

“I focussed on those two areas for my Master’s Degree at Chester University,” she says. “During my Master’s, I worked on a placement with the English Institute of Sport. I was working with gymnasts and while I was there, I got to grips with a lot more data, helping out athletes and coaches. This was where I first fell in love with Tableau. I loved seeing how they reacted to seeing their data being visualised and how they used it to improve performance.”

When her time with the English Institute of Sport came to an end, Lorna joined The Data School. As it happens, she had seen a post published by Rob Carroll of The Information Lab Ireland advising would-be Tableau enthusiasts that there were openings for what was back in 2015 only the second cohort to join school (six years on and the school has recently welcomed its twenty-sixth cohort).

“When I joined The Data School, I knew I was in the right place,” says Lorna. “That first four months of training in Tableau and Alteryx was wonderful and then we had the placement. It made me realise how powerful the tools are. My feeling was that software like Tableau can really help people who don’t maybe like data or understand its power, to see how it can help. Letting people see and understand data is what it’s all about.”

Throughout her journey with The Data School Lorna and her class were encouraged to get involved with the community. This, says Lorna, was something that helped her improve her Tableau skills immeasurably and is the main reason she is always so keen to give back.

“So on top of everything I learnt at The Data School, I learnt so much more from the Tableau Community,” she says. “All of that free content has got me to where I am today. So my idea, when I started doing speed tipping, like I’ll be doing for the Tableau User Group Dublin, was to give back to the community.”

Today Lorna is at the top of her profession. Already a Tableau Zen Master, she is highly respected by her peers throughout the Tableau and data world for her knowledge but above all her generosity.

When last year, Carl Allchin was coming to the end of his book on Tableau Prep, he was approached by his publisher to see if he knew anyone who could deliver a Tableau Desktop Cookbook. He was quick to reply.

“They were looking for a cookbook style,” says Lorna. “They were quite prescriptive around that. They weren’t too worried about the content but the style had to be simple; a step-by-step solution and then a short discussion at the bottom.”

“It took me a while,” says Lorna, “but I really enjoyed putting it together and lockdown really helped me to focus on it. I wasn’t going out at weekends so much so that was great. Some chapters were tougher to do than others but I had a lot of support and there was quite a bit of learning for me on it. There always is when it comes to Tableau.

Lorna’s Tableau Desktop Cookbook is a must for anyone with an interest in Tableau. It consists of twenty chapters with hundreds of recipes and is a great reference for Tableau users of all levels.

“For me it’s really for beginners,” says Lorna. “It goes back to the basics of connecting to data and building simple charts but there is something for everyone in there. It’s like at my speed tipping sessions; when people attend, no matter the level, they always tell me that they have gone away with something from that session. So I think having that in a book can really help solidify those ideas.”

Hopefully we will get one or two tasters at the next Tableau User Group Ireland. As always our members are hungry for the best and latest Tableau tips and we are looking forward to finding out more on September 22nd. Find out more and don’t forget to register. 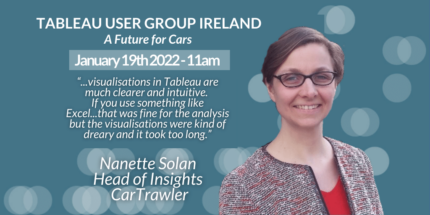 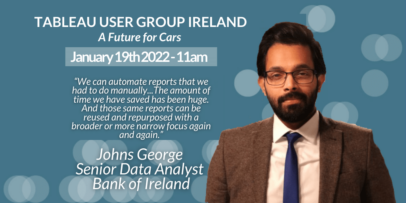 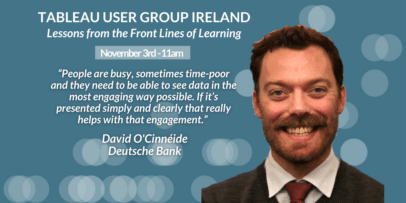