Ahead of this week’s Tableau User Group Ireland, on Thursday May 26th, we caught up with Tableau Ambassador, Simon Runc, to find out more about his journey with Tableau and why it remains the best tool available for Data Visualisation.

PLEASE BOOK YOUR SPOT FOR THE UPCOMING TUG IRELAND

Simon Runc has spent the majority of his career working in retail analytics and has built up over twenty years experience. During his early days at Sainsbury’s building “reports for execs that didn’t know how to use Excel properly” through to his later years in The Body Shop, Simon caught snippets of “the wonders of visual analytics” and “how visualising data offered a much better way of exploring it and analysing it”.

“The thing that makes Tableau different from any other tool I’ve used is that it’s really a data-driven drawing canvas.”

“That started me on my journey of thinking about data visually,” says Simon. “It really resonated with me. Towards the end of my time with The Body Shop, the company I now work for Atheon Analytics, was doing some work with us and they suggested I take a look at Tableau.”

“At Atheon, our mission is to humanise data for the retail sector,” says the 46-year-old. “We work a lot with suppliers to grocery supermarkets in the UK. We provide visual tools, through Tableau, to allow FMCGs to explore their data visually and make complex decisions  with confidence.”

Nine years on from that life-changing move, Simon’s enthusiasm for Tableau remains the same.

“The thing that makes Tableau different from any other tool I’ve used is that it’s really a data-driven drawing canvas, rather than a souped up chart wizard,” he says. “So rather than saying here’s the fields I want and here are the measures and  I want a bar chart or a line chart,  Tableau thinks in mark type and not chart type. That’s an important distinction. Yes, a lot of the time you end up with line charts and bar charts but they’re almost like an emergent property of how you want to visually encode the data.”

“Tableau is very creative. You can make whatever you want because they all follow that grammar of graphics mental model. This abstraction to a simple rule-set makes Tableau very easy to use. Over the years they have added lots of features but the basic Blue and Green Pill and the Marks Card haven’t changed. They don’t have to change, that is Tableau’s secret sauce.”

“We used a tool years ago which felt like each chart type was a  different bit of software. So where you changed the title in a line chart, say, was different from where you changed it in a bar chart. Tableau doesn’t do that, it is very consistent. Once you’ve learnt and understood Blue and Green Pills, Level of Detail and the Marks Card, it’s only your imagination that stops you.”

This won’t be Simon’s first TUG. The Londoner has a reputation for being very generous with his knowledge and this is one of the reasons he was made a Tableau Ambassador. At the Tableau User group Ireland on May 26th, Simon plans to talk about Sets in Tableau and how they have been a game changer in self service analytics.

“Sets are really powerful because they let you group things on the fly and let you compare those groups of things, which is ninety-five per cent of analytics,” he says. “Grouping things and seeing how each group has changed with respect to time and one another is what a lot of analysis boils down to.”

A big part of Simon’s work involves creating self-service products for customers; many of whom don’t have the skills to create their own dashboards and complex analysis.

“And rightly so,” he says. “If a Marketing Manager can use BI Tools like a BI developer, they have spent too much time learning BI tools and not enough learning marketing.”

One of the main things we want to do is give customers the ability we have in Tableau, with sets, and allow them to group anything on the fly. So the user can choose a set of control stores and a set of trial stores, for example, and be able to compare them. When Tableau introduced Set Actions that was the first time I was able to build stuff that allowed the user to change the contents of sets themselves.”

With some tweaks and improvements over the last few iterations, Sets have become even easier to use. This allows Simon to “build Tableau dashboards that use sets to group things together, build all the logic for people and allow the end user to choose whatever product, whatever stores, whatever time period they want [using sets]”.

“You want to give the people who are experts in their domain your Tableau ability,” says Simon. “This is going to be the focus of my talk really. How Sets have evolved and how we can now expose them in a very intuitive-to-use way for the end user. It lets us build really useful products for people. Products that give the end user the ability that used to be exclusively ours.”

The giving continues on May 26th and we are really looking forward to Simon’s presentation.

PLEASE BOOK YOUR SPOT FOR THE UPCOMING TUG IRELAND

As part of its vision, The Information Lab Ireland regularly hosts free events throughout the country to show how being data-driven can improve decision making and lead to a better understanding of the world around us. For more on these events please catch up with us on LinkedIn 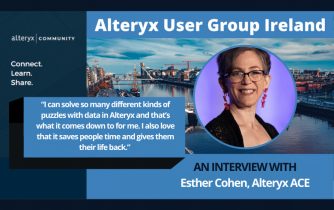 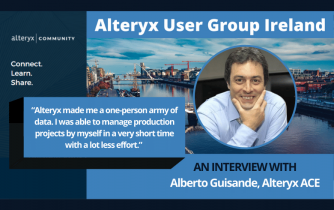 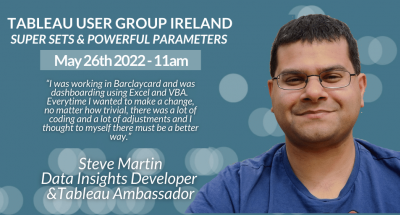